Town of Gates-Yesterday and Today Previously known as the Town of Northampton, the Town of Gates was incorporated on April 1, 1813. It was named after the American Revolutionary General Horatio Gates. Its first supervisor was Zaccheus Colby. In 1813, the town was located in Genesee County and its borders were north to Lake Ontario, east and south to the Genesee River, and west to Parma. Its borders included Rochesterville which incorporated in 1817 as part of the City of Rochester and the Town of Greece which incorporated in 1822. It became part of Monroe County in 1821.

After nine annexations, the Town of Gates is now only 15.06 square miles and is the smallest geographical town in Monroe County. The Town of Gates became part of Monroe County in 1821 when the New York State Legislature approved legislation creating the new county named after the 5th president of the United States, James Monroe. 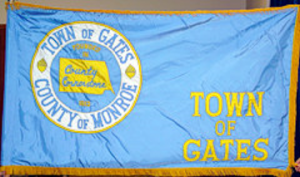 The Town of Gates celebrated its Sesquicentennial (150th birthday) in 1963. It was during this celebration that its current flag, colors and seal were adopted. The flag colors are blue and gold. The logo on the seal “County Cornerstone” is symbolic of the development of other municipalities from land that was once part of Gates. The Town of Gates is the geographical center of Monroe County.

In 1927, the Gates (fire) Protection Association was formed and its first motorized truck procured. In 1929, the fire district was formed incorporating the Town of Gates and parts of Chili. In 1960, Gates established it first full time police department with the hiring of Chief William Stauber. 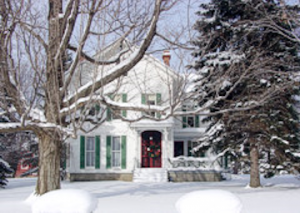 The early settlers of Gates were farmers, among them was William Hinchey whose clapboard farm house at 634 Hinchey Road is now owned by the Town of Gates and managed by the Gates Historical Society as the “Hinchey Homestead”.

The current Gates Town Hall, Community Center, Police Department, Library and Court Offices are located at 1605 Buffalo Road. The original building completed in 1969 replaced the old town hall (which served the community from 1940-1969) located at 1548 Buffalo Road, and the original library located in the Grange Hall. The complex was expanded in 1985 when the Annex was built to accommodate the needs of an ever expanding senior citizen population. In 2000, the new court facility was added to provide additional operating space and court rooms. In 2004, the new Public Safety Building located on Elmgrove Road was completed to provide needed space for the Gates Ambulance and the Gates Police Department.

Today, the Town of Gates is a great place to live, work and raise a family. Centrally located within the county, it offers convenient access and many amenities important to family life.

The Gates community offers convenient shopping and recreational facilities, town owned and operated parks and youth and adult recreational programs, affordable housing, stable taxes, dependable police, fire and ambulance services and easy access to churches and schools. In addition, the Town of Gates is the home to a number of manufacturing, industrial and commercial businesses.

Within its borders, you are immediately accessible to the new Wal-Mart Super store, Wegmans, Chase Pitkins Home and Garden Center, Home Depot, the Garden Factory and a number of fine quality plazas specializing in ethnic foods, and service businesses ranging from superb restaurants to shoe repair.

In addition to unique recreational facilities; such as the indoor fields at Total Sports Experience and Cinemark’s Tinseltown and Imax theatres, there are a number of exceptional year round town sponsored youth and adult recreational programs. The Westside YMCA completed in September 2004 further enhances the town’s great quality of life and the Brooklea Country Club offers a newly renovated clubhouse and a challenging 18 hole golf course.

The business opportunities are endless. There is ideal manufacturing, commercial and industrial business space available at the 500 acre Rochester Technology Park and Elmgrove Crossings, as well as other established business parks within the community. The Town of Gates is the home of Wegmans’ corporate offices and is proud to welcome Eastman Kodak back to our community.

The opportunities in the Town of Gates are endless and its next milestone will be in the 2013 when the town celebrates its Bicentennial (200th birthday).